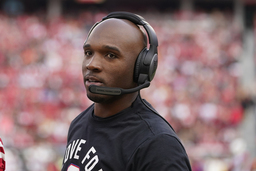 The Indianapolis Colts still want to interview 49ers defensive coordinator DeMeco Ryans for their head coach vacancy, and are planning to give Jeff Saturday a second interview along with six or seven other candidates, a person familiar with the team's plans told The Associated Press.

The person spoke on condition of anonymity Tuesday because the team is still narrowing its list of coaches for second interviews to seven or eight.

Ryans had an interview planned with the Colts last week, but had to postpone to focus on preparation for San Francisco's divisional playoff game against the Dallas Cowboys. Ryans interviewed with the Texans and Broncos, but also had to postpone with the Cardinals. The Panthers also are interested in Ryans.

The 49ers beat Dallas and will face the Philadelphia Eagles in the NFC championship game on Sunday.

Ryans can have second interviews with Houston and Denver next week whether the Niners win or lose, per NFL rules. The window for first interviews with teams has closed for now so he'll have to wait until San Francisco's season is over to speak with the Colts, Cardinals and Panthers.

The Colts fired coach Frank Reich in early November after a third straight loss and replaced him with Saturday on an interim basis. After winning his first game at Las Vegas, Saturday and the Colts lost their last seven to finish 4-12-1.

Saturday, a former two-time All-Pro center who snapped the ball to Hall of Fame quarterback Peyton Manning for 12 seasons with the Colts, was working as an ESPN analyst when the Colts brought him in to replace Reich.