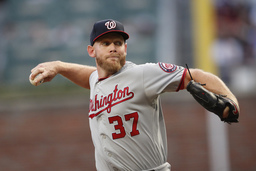 Right-hander Stephen Strasburg will try for his 17th victory as the Washington Nationals attempt to even up their three-game series with the American League Central Division-leading Minnesota Twins on Wednesday night in Minneapolis.

It's only the second career start for Strasburg (16-6, 3.50 ERA) against Minnesota and his first ever at Target Field. He received a no-decision in a 2016 home start against the Twins when he allowed four runs on seven hits while striking out 10 over 7 1/3 innings.

Left-hander Martin Perez (10-6, 4.75 ERA), who has won two of his last three starts, gets the nod for Minnesota, which won the series opener 5-0 on Tuesday night. The Twins got a two-run homer from Mitch Garver while Jose Berrios, Sergio Romo and Trevor May combined to two-hit the Nationals.

Perez has faced the Nationals just once in his career, and he didn't get a decision in the start, allowing two runs in five innings (3.60 ERA).

The Tuesday setback was the fifth loss in six games for Washington (79-64). The Nationals have struggled on offense recently, managing just 10 runs off opposing starters in the past eight games.

Berrios, who entered the Tuesday game with a 1-3 record and 8.07 ERA in his six previous starts, had a perfect game for 4 1/3 innings and yielded just two singles and a walk over seven innings.

"He was good tonight," Nationals manager Davey Martinez said. "We didn't get many pitches to hit. When we did, we hit the ball hard, but we just couldn't get anything going."

Martinez wasn't ready to push the panic button after the latest loss.

Minnesota (89-55) maintained a five-game lead over the Cleveland Indians with 18 games remaining thanks in large part to the pitching of Berrios.

"He was outstanding tonight," catcher Mitch Garver said. "Really good fastball command. Slider was outstanding. He was throwing the ball where he wanted to. I thought his velocity was up tonight. I was just really impressed. We needed that start out of him, and he really delivered."

Still, Washington starter Anibal Sanchez had a no-hitter for 4 2/3 innings and matched Berrios with six shutout innings before Eddie Rosario opened the seventh with a double and Garver followed with a 425-foot blast into the second deck in left-center.

"I'm just playing one game at a time," Garver said when asked about joining the 30-homer club. "I'm trying to stay within myself and just play good baseball. This late in the season, we're just focused on wins and playing quality baseball. Those are the things that are going to propel us to the end."