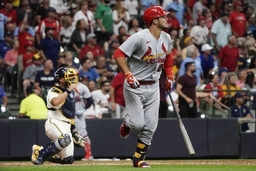 The Milwaukee Brewers likely will have to figure out the St. Louis bullpen to salvage a split with the visiting Cardinals when the division rivals wrap up a four-game series on Thursday afternoon.

Right-hander Dakota Hudson (5-3, 3.31 ERA) will start for the first-place Cardinals, who are a game in front of the Brewers in the National League Central after winning two of the series' first three contests.

The Brewers will counter with right-hander Jason Alexander (1-0, 2.42 ERA), making his fifth start since a June 1 call-up from Triple-A Nashville.

Nolan Arenado's go-ahead, two-run homer in the sixth inning led the Cardinals to a 5-4 victory on Wednesday. Paul Goldschmidt also had a two-run homer off Brewers lefty Eric Lauer, who has given up eight long balls in his past three starts.

"We've talked about our 'pen quite a bit, as far as those middle innings," Cardinals manager Oliver Marmol said. "We've seen (Zack) Thompson and Ovie (Johan Oviedo) really prove what they're capable of doing, which is fun to watch."

Milwaukee is 1-for-20 with runners in scoring position in the first three games of the series.

"We got 13 outs against their bullpen, we need to be able to put a run on the board," Brewers manager Craig Counsell said. "At the same time, they're throwing the ball well. But when you get a starter out before the fifth inning ends, you're hoping with enough cracks against the bullpen you can put something together."

Hudson is set to start against Milwaukee for the third time this season. He gave up four runs (three earned) in three-plus innings during a 6-5 loss on April 17, then tossed 4 2/3 scoreless innings in a no-decision in the Cardinals' 4-2 win on May 27.

Alexander, signed to a minor league free agent contract in the offseason, was called up after injuries to starters Freddy Peralta and Brandon Woodruff. He picked up his first major league victory in his latest start, when he gave up three runs, two earned, in 5 2/3 innings en route to a 7-3 road win over the Cincinnati Reds on Saturday.

His 2.42 ERA is the third lowest in franchise history of any pitcher after his first four major league appearances, all starts, although opponents are hitting .330 against him.

Alexander will be facing the Cardinals for the first time.