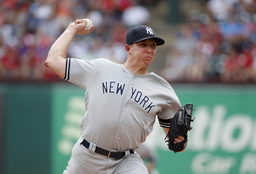 Alone among major league teams, the Yankees never used a pitcher three days in a row during the regular season.

A bullpen featuring Chapman, Zack Britton, Adam Ottavino, Chad Green and Tommy Kahnle is a relief for New York fans and fear-inducing for opponents, a baseball Cerberus, the mythical multi-headed dog with snakes and a serpent protruding.

"I just think it's a luxury to have it happen this way," Ottavino said. "Luckily, we took care of business this year and got a nice lead and they were able to kind of stagger our appearances a little bit heading down the stretch. I think it's just good because we're expecting a big workload here in October."

If ever relievers were ready and rested during the postseason, it is this group as the Yankees head into the AL Championship Series against Houston or Tampa Bay starting Saturday. And now they have four more days to rest up, increasingly important in a postseason in which none of their starters pitched into the sixth.

New York's bullpen had a 2.03 ERA in the Division Series sweep of Minnesota, allowing three runs and 10 hits in 13 1/3 innings with 16 strikeouts and seven walks - their biggest weakness. And that is in an October of bullpens blowups across the Division Series, where "relief" pitchers entered Tuesday with a discomforting 5.85 ERA.

While Mariano Rivera was a key to the Yankees' five World Series titles from 1996-2009, general manager Brian Cashman has tried to put together a seemingly bottomless bullpen in Aaron Boone's two seasons as manager.

"When you get into these postseason games, especially when you have some off days sprinkled in, you don't worry as much about workload," Boone said last fall. "You just kind of weigh what matchups you like better, especially as you get to the second, third time through an order."

"Spahn and Sain and pray for rain," was the saying of the 1948 Boston Braves (adopted from Gerald V. Hern's poem in the Boston Post), a reference to dominant starters Warren Spahn and Johnny Sain.

Modern baseball has turned the strategy around: Somehow get past the first few innings, then bring in the power arms. Only in this group could the loss of Dellin Betances for nearly the entire year be minor.

Chapman averaged 98 mph with his fastball, down from 101 mph three years ago. While the six-time All-Star's velocity was lacking early this season, the 31-year-old left-hander topped out at 102.7 mph in the summer, and he has gradually doubled his usage of sliders to 31 percent during his four years with the Yankees. He converted 37 or 42 chances with a 2.21 ERA, .182 opponents' batting average and 85 strikeouts in 57 innings.

His appearances have been far more limited with New York than when he was traded to the Cubs in July 2016 and helped Chicago win its first World Series title in 108 years. Chapman threw 159 pitches over nine games from Sept. 1 through the end of the regular season that year, then 273 more as he pitched in 13 of Chicago's 17 postseason games.

"I think that was a different scenario," Chapman said through a translator. "I believe our bullpen is much more solid, more compact, more options."

New York, which re-signed Chapman as a free agent ahead of the 2017 season, used him just five times this September and twice for a total of 44 pitches against the Twins.

Britton, another 31-year-old left-hander, was among baseball's top closers in 2015 and `16, then was slowed by a forearm injury in 2017 and tore his right Achilles tendon during an offseason workout. He returned the following June, not nearly as fearsome, was dealt to the Yankees and re-signed as a free agent in January. His 1.91 ERA was his best in three years and he had a .179 batting average against, dominating batters with a slider that at times was difficult to control. Britton's 78.5 percent of groundballs was No. 1 among big league relievers.

"I knew that the idea from spring training on was don't throw three days in a row," he said. "So that allows those recovery days throughout the season that maybe we normally wouldn't get. That was big. That was for the postseason where, ideally, they'd like to throw us every single game with the days off. So we're ready for it."

Ottavino, a 33-year-old right-hander, left Colorado as a free agent, and the native New Yorker signed with the Yankees in January. He had a 1.90 ERA, .195 batting average against and 85 strikeouts in 57 innings.

"Everyone feels I think really strong in our bullpen just based on the fact that we've had some designated days just to focus on recovering," he said. "It's not sometimes the physical recovery that you need, but just kind of taking a mental break through the course of a long season. We've had a lot of opportunity to do that."

Boone knows he has far more top choices than a Sparky Anderson, known as Captain Hook when managing the Cincinnati Big Red Machine in the 1970s.

"Especially coming into that first game where you have four days off," Boone said before the Division Series, "where you have a very well-rested bullpen and hopefully guys that you can extend even more, if we like a better matchup, we won't hesitate to go to it."