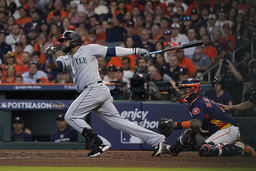 PITTSBURGH (AP) Carlos Santana tugged at his new Pittsburgh Pirates cap, pulled at his jersey and broke into an impromptu dance.

Cities change. Circumstances change. Expectations change. The urge to get loose whenever the moment strikes the veteran first baseman/designated hitter does not.

"That's who I am, just a really happy person," Santana said through a translator Tuesday after signing a one-year, $6.75-million deal to give Pittsburgh's young group an elder statesman of sorts. "I really like to have a good time."

A vibe that's been in short supply for the Pirates during the organization's methodical and bumpy bottom-up remodel under general manager Ben Cherington. While Cherington has spent the last three years trying to stack the team's minor league system with as many prospects as possible, the major league product has suffered.

The Pirates have finished with at least a share of last place in the NL Central in each of Cherington's three seasons. Adding Santana and fellow first baseman Ji-Man Choi - acquired in a trade with Tampa Bay on Nov. 10 - is part of a plan to make the major league club more competitive next summer.

Pittsburgh struggled to hit with power consistently while finishing 62-100 in 2022. The Pirates finished near the bottom of the majors in runs (27th), on-base percentage (28th) and slugging (27th).

While Santana hit just .202 last season, he posted a .316 on-base percentage, which would have been good enough for third on the Pirates. The switch-hitter also mashed 19 home runs, 15 of them for the Mariners, who acquired Santana in late June to help fuel the team's first playoff berth since 2001.

The inviting presence of the short porch over the Clemente Wall in right field at PNC Park and the MLB's decision to ban the shift in 2023 could help Santana provide some protection in the lineup for star center fielder Bryan Reynolds and young shortstop Oneil Cruz, among others.

"You could look back at the last two or three seasons, and you could see I'm probably one of the players most affected by a shift," Santana said. "I think now that it will be banned, it's going to help me greatly getting on base."

Santana also knows what it's like to be on a young team in a smaller market trying to find its footing. He reached the postseason four times while spending a decade in Cleveland at the start of his career and his experience helped calm an upstart Mariners clubhouse as the team surged to an improbable playoff berth.

While Pittsburgh may still be a year or two away from truly contending, Santana is high on the group's potential and eager to be a mentor.

"I will try to help out in two ways," Santana said. "One, with my performance and the work that I put out. Also just hoping to be a role model with the way I carry myself as a good teammate. Not just on the field but being a good person off the field around them as well."

Cherington said it will be up to manager Derek Shelton to figure out whether Choi or Santana play first base or serve as the designated hitter on a given day. Both remain capable defenders and give the Pirates options with legitimate experience at a position that was a serious weakness in 2022.

Santana joked he may need a new glove to deal with the fastballs Cruz will fire from shortstop. He's happy to chip in any way he can for a team that could benefit from a player who has been where it is trying to go.

"I've been in this situation before," Santana said. "I've been in a clubhouse with a lot of young talent. I can bring my experience and be there for them."