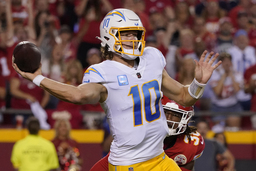 COSTA MESA, Calif. (AP) Quarterback Justin Herbert was mainly a bystander Wednesday as the Los Angeles Chargers went through their first practice in preparation for Sunday's game against the Jacksonville Jaguars.

Herbert did some handoffs to running backs but did not do any throwing during the portion of practice open to the media. Herbert suffered fractured rib cartilage after taking a hit during the fourth quarter of Thursday night's 27-24 loss to the Kansas City Chiefs.

Coach Brandon Staley said Herbert did some light throwing Tuesday but the third-year quarterback's status remains day-to-day. Herbert was one of three players listed as a limited participant on the team's practice report.

"He's had a lot of rest since the last game, but I think the nature of the week is truly going to be a case-by-case, day-by-day basis," Staley said. "We're just going to see where his comfort level is, and truly trust him and let him be the guide of where we're at, and make sure that we are prepared either way."

Herbert missed only one play after taking a hard hit from Kansas City defensive lineman Michael Danna on a 12-yard completion to Gerald Everett with five minutes to go. He led the Chargers (1-1) on a nine-play, 73-yard touchdown drive the series after he was injured.

Herbert will wear a rib protector but could also receive an injection to deal with the pain. It did not go well the last time that happened to a Chargers quarterback.

In 2020, Tyrod Taylor suffered a rib injury during the Chargers' opening win in Cincinnati. A team doctor then punctured Taylor's lung while giving him a pain-killing injection before a game against Kansas City. Taylor went to the hospital, and Herbert found out he was getting his first NFL start less than a minute before kickoff.

Taylor did not file a grievance through the NFL Players Association but sued team doctor David Gazzaniga for medical malpractice. The lawsuit, which seeks at least $5 million in damages, was filed in Los Angeles County Superior Court in May 2021. A trial was scheduled to begin in November but has been moved to next June.

Herbert has made 34 consecutive regular-season starts, seventh among active quarterbacks.

"I think that we have full alignment with Justin, his family, his agents, and the medical professionals. That's what we're going to try and do, have alignment that way and trust the process, and, hopefully, get him well soon," Staley said.

Chase Daniel would be in line to start if Herbert could not go. The 13-year veteran has six career starts, most recently in 2019 for the Chicago Bears.

"My approach (to practice or preparation during the week) never changes regardless of what happens. I think that is what has suited me so well," Daniel said.

Easton Stick is the third-string QB but has taken only two regular-season snaps in three-plus seasons.

The Jaguars (1-1) were the first team Herbert beat as a starting QB. He threw for 347 yards and three touchdowns along with rushing for 66 yards and a score as the Chargers won the 2020 matchup 39-29 to snap a four-game losing streak.