Playoff spot in tow, Giants pursue other goals vs. Padres 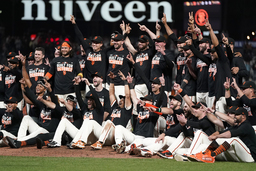 With one goal accomplished, the San Francisco Giants can turn their attention to two others when they continue a four-game home series against the San Diego Padres on Tuesday night.

The Giants (94-50) became the first team in the majors to clinch a postseason berth this year, thumping the Padres 9-1 in the series opener.

The win assured San Francisco, which has the best record in baseball, no worse than a wild-card berth in the National League playoffs.

Riding an eight-game winning streak, the Giants remain in a fight for two more highly cherished postseason positions: the NL West title, which would allow them to avoid the potential one-and-done wild-card game, and the best record in the major leagues, which would ensure them of home-field advantage throughout the playoffs.

San Francisco currently has the upper hand in each pursuit. The Giants stand 2 1/2 games ahead of the Los Angeles Dodgers (92-53) in both races, with the NL Central-frontrunning Milwaukee Brewers (89-55) and the AL East-leading Tampa Bay Rays (89-55) both five games behind.

Even with just 18 games to go and each potentially having a significance, Giants manager Gabe Kapler gave his guys the green light to celebrate after Monday's win.

"I think it's totally fine to take a step back and recognize that we accomplished something special," he said. "We've got a long way to go and a lot of work to do, but what they've accomplished so far is worth celebrating."

Despite four straight losses, the Padres (74-69) still find themselves in the heart of the NL wild-card race. San Diego and the St. Louis Cardinals (74-69) each trail Cincinnati (75-69) by a half-game in the race for the second NL wild-card spot, with the Philadelphia Phillies (72-71) just 2 1/2 games behind the Reds.

The Padres lost more than just ground in the standings on Monday when they had to place one of their top pitchers, Chris Paddack, on the injured list due to right elbow inflammation.

"The best thing, we thought, is to get him the nine or 10 days off and see where we're at," San Diego manager Jayce Tingler said of the move. "(We'll) see if he can make a start when we get back (home) for that San Francisco series (next week)."

Tuesday's Giants-Padres rematch will be a duel between former NL Central combatants, Anthony DeSclafani (11-6, 3.33 ERA) of the Giants and Jake Arrieta (5-12, 7.04) of the Padres.

DeSclafani, who pitched five seasons for the Reds, and Arrieta, who was on the Chicago Cubs' starting staff for parts of six campaigns, will be going head-to-head for the third time. They split decisions in 2015, with DeSclafani's Reds winning 3-2 on April 14 before Arrieta's Cubs turned the tables 12 days later with a 5-2 win.

DeSclafani has gone winless in three starts against the Padres this season, allowing seven runs in 16 1/3 innings (3.86 ERA). The Giants wound up winning two of the three games.

The 31-year-old right-hander is 1-1 in his career against the Padres with a 2.90 ERA in seven starts.

Arrieta faced the Giants while he was still with the Cubs earlier this season, bombed for six runs in two innings in an 8-5 loss on June 4. He allowed a two-run home run to Steven Duggar and a three-run shot to Alex Dickerson in the drubbing.