Twins try to rebound from two tough losses to Guardians 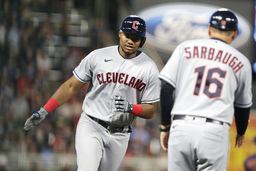 An angry group of Minnesota Twins will try to avoid getting swept in their American League Central showdown with the red-hot Cleveland Guardians in the series finale on Thursday afternoon in Minneapolis.

The Twins, who entered the series in first place, blew a two-run lead in the eighth inning of a 6-5, 11-inning loss in the series opener on Tuesday. Minnesota then squandered a three-run lead in the ninth en route to a wild 11-10 loss on Wednesday.

"There's no one in our clubhouse who's not (ticked) off right now," Twins manager Rocco Baldelli said. "So that's fine. We should be a little (ticked) off based on the way we played the last couple of days and just the inability to get the job done."

Cleveland's Franmil Reyes clubbed a game-tying, two-run with two outs in the eighth on Tuesday. On Wednesday, Oscar Gonzalez, who hit a two-run homer during a three-run seventh, added a two-run bloop single to highlight a four-run ninth that saw Cleveland overcome a 10-7 deficit.

"Like (Tuesday) night, it was two clubs that really wanted to win," Guardians manager Terry Francona said. "They came back, we came back. Fortunately when it was over, we had one more (run) because that was a lot of back and forth."

Minnesota looked in prime position to even the series thanks to Gio Urshela's three-run homer in the seventh that broke a 7-7 tie. However, for the second straight game, the Minnesota bullpen couldn't close it down.

"I'd be lying if I said it wasn't a very difficult ballgame to get over," Baldelli said postgame. "We have to get over with it. We have a game tomorrow morning basically to get ready for."

If the Twins can bounce to back to win the series finale, they would be just percentage points behind the first-place Guardians, whom they will play again five times next week in Cleveland.

"For a few minutes now it's not a fun one, it's not an easy one to get over," Baldelli said. "The ups and downs over a course of a game like that, they do take a little something out of you. There's no way around that.

"We've played two games in a row like this that feel very unsatisfying and we're kind of (ticked) off. But you can't focus on that too long because we have another game to get ready for."

Smeltzer is coming off his worst start of the season, when he allowed seven runs (six earned) on nine hits in 4 1/3 innings in a 7-2 loss at Arizona on Friday night. He is 1-2 with a 5.33 ERA in six career appearances (four starts) against Cleveland.

Plesac didn't get the win but was impressive in his latest start, a 2-1, 10-inning road victory for the Guardians over the Los Angeles Dodgers on Friday. He allowed just one run -- a solo homer by Cody Bellinger -- on five hits over six innings.

Plesac has struggled against the Twins in his career, compiling an 0-1 record and a 6.26 ERA in four career starts, including an 0-1 mark and a 7.71 ERA in two career starts in Minneapolis.

No matter what happens Thursday, the Guardians will leave Minneapolis having won their seventh series in a row. Cleveland is 17-4 over its past 21 games.

The Twins have lost three games in a row and four of five.