Yankees, Astros face off in matchup of division leaders 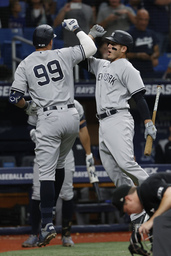 The Houston Astros and New York Yankees hold double-digit division leads and it is possible both teams could see a lot of each other with the American League pennant on the line in mid-October.

In the meantime, the rivals will see plenty of each other when the Astros head to Yankee Stadium for the opener of a four-game series with the MLB-best Yankees on Thursday night. New York fans will likely have their share of profane chants directed at Jose Altuve.

"I don't get that caught up in it," Yankees manager Aaron Boone said. "It's a team we have a rivalry with. You appreciate being involved in a series like that. I don't think I put any more into it. It's not October. They're important games against a great opponent and I hope we play well."

The Yankees are seeking their 15th straight home win. Since its last home loss on May 23, the Yankees are outscoring foes by an 83-22 margin, are 22-5 in their past 27 games overall while opening a 12-game lead over the second-place Toronto Blue Jays.

New York is on its longest home winning streak since winning 15 straight at the original Yankee Stadium on Aug. 16-Sept. 26, 1961. The Yankees kept the streak going last Thursday when Anthony Rizzo hit a game-ending homer in a 2-1 win over Tampa Bay.

Since its last home appearance, New York won four of six games in Toronto and Tampa Bay. They capped the trip with a 5-4 win on Wednesday when Jose Trevino hit the go-ahead two-run homer in the eighth inning. Before Trevino connected, Aaron Judge went deep twice, raising his MLB-leading total to 27.

Houston is 2-0 in a stretch of nine straight games against the Yankees and Mets and the Astros head to the Bronx with a 10-game lead on the Texas Rangers in the AL West.

The Astros are on a three-game winning streak and 7-2 in their past nine games following a three-game skid June 8-11. Houston completed a two-game sweep of the visiting Mets Wednesday afternoon when Yordan Alvarez homered twice in a 5-3 win to raise his season total to 21.

"Whenever a player goes to New York and plays there, it's just really exciting with the history of that team and the ballpark," Alvarez said through a translator. "We know they're a really good team so we're just going to compete and try to win."

Framber Valdez (7-3, 2.78 ERA), who is 6-1 with a 2.42 ERA over his past seven starts, opens the series for Houston. He completed at least six innings for the 10th straight time in Friday's 13-3 win over the Chicago White Sox, when he allowed three runs on eight hits in six innings.

Valdez is 0-1 with an 8.59 in two career starts against the Yankees, who drew six walks in four innings against him in Houston on July 11.

Jameson Taillon (8-1, 2.70), who has won his past eight decisions and has allowed two runs or less in 10 starts this year, goes for New York. He last pitched Saturday, when he struck out eight and allowed four hits in 5 2/3 innings of a 4-0 win at Toronto.

Taillon is 0-1 with a 2.57 ERA in two career starts against Houston and allowed two runs in six innings while opposing Valdez in July of last year.