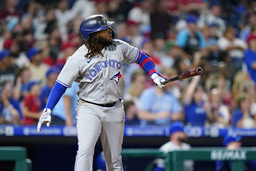 The Toronto Blue Jays will meet up with a familiar foe Thursday night when they open a four-game series with the Tampa Bay Rays in St. Petersburg, Fla.

Wild-card rivals in the American League East, Toronto and Tampa Bay squared off last week in Canada in a rare five-game series over four days.

On Wednesday, as the Rays were on their way to being swept at home for the first time in 3 1/2 years, the Blue Jays blew a 3-0 lead in the eighth inning in Philadelphia.

Knotted at 3 with the Phillies, Toronto saw Teoscar Hernandez line into a double play with the bases loaded in the 10th.

In the same situation in the home half, Matt Vierling chopped a game-winning single into center for a 4-3 Phillies win - capping his first career 5-for-5 night.

Interim manager John Schneider opted to go with sidewinder Adam Cimber in the 10th rather than Anthony Bass.

"No. We just liked Cimber in that spot," Schneider said when asked if something was wrong with Bass.

The Blue Jays remained in the top wild-card spot by two games over the Rays and 2 1/2 over the Seattle Mariners.

After seeing dynamic right-handed starting pitching in all three games against the Houston Astros, the Rays will get a look at another right-hander, Jose Berrios (11-5, 4.99).

Against the Rays on Sept. 12, Berrios earned no decision in a 6 1/3-inning start, allowing two runs (one earned) on six hits. He walked one and struck out four in Toronto's 3-2 win.

Across seven career starts against the Rays, Berrios is 1-3 with a 4.83 ERA.

Playing inconsistently lately, the Rays might be showing a few cracks in the team's clubhouse composure as some frustration boiled over while being swept over three games by the Astros.

Reports surfaced in the series that standout hitters Randy Arozarena and Yandy Diaz had a disagreement and ensuing altercation Monday night following the team's 4-0 loss.

"Just a couple things we needed to talk about. He and I are good, goal is to focus on team now. We took care of it," said Arozarena, who added that there was no physical contact.

Neither played in Tuesday night's 5-0 loss to Houston, and only Arozarena was in Wednesday's lineup for their 5-2 defeat in the series finale.

That wasn't the only jarring moment for the Rays this week. Shane McClanahan (neck tightness) confirmed that he was fine after exiting Tuesday's game, despite wanting to stay in.

"I fought to stay in the game," said McClanahan, who is scheduled to start Sunday. "But in the middle of September, I respect the precautionary move. I'm just getting off the IL, so I could see the err of caution. I feel fine."

Yarbrough is 8-3 with 3.36 ERA in 20 career appearances (nine starts) against Toronto.