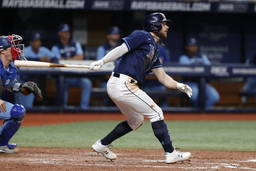 "We're probably pressing," Blue Jays manager Charlie Montoyo saif. "What I know from experience is that good hitters are going to hit, and you can't panic about a good offense when you have 129 games left. It's just that right now, because we've played so many close games, everything gets magnified because everybody is expecting our offense to be one of the best in baseball."

The Rays broke a 2-2 tie with three straight hits off starter Kevin Gausman (3-2).

Margot returned to the lineup after missing two games with a tight hamstring and extended his hitting streak to 10 games with his go-ahead single.

Andrew Kittredge (3-0) got the win in relief and Jason Adam pitched the ninth for his first major league save.

Lowe became the first player to hit two triples in a major league game this season. He thought the first was a home run and would have happy with a single on the second.

"I got that ball about as good as I'm going to get a ball," he said of his 400-plus foot shot leading off the second that sent Toronto center fielder George Springer crashing into the ball. "I thought it was way out, honestly."

In the eighth, he hit a looper into short right-center that skipped between two outfielders.

"I saw (center fielder Raimel) Tapia making a run at it and everyone knows how fast he is," Lowe said. "I was praying that I was going to get a single out of it. I saw it drop and the only thing going through my head was to run."

Ji-Man Choi drove in the Rays' first run with a groundball after Lowe's first triple. A three-base throwing error on Gausman set up another Rays run in the fifth when Mike Zunino's RBI single made it 2-0.

Tapia led off the Toronto fifth with an infield single, moved up on a walk and scored on Vladimir Guerrero Jr.'s two-out single.

The Blue Jays made it 2-all in the seventh after pinch-hitteer Vinny Capra led off with the first of three straight singles against Brooks Raley. It was Capra's first major league hit.

Gausman gave up five hits and one walk and struck out eight. It was his 16th straight start in which the right-hander has walked one or none.

"He gave us a chance again," Montoyo said. "If he's not the best pitcher in baseball, he's one of the best."

Rays starter Drew Rasmussen allowed one run on three hits in 5 2/3 innings, leaving the game with a 2-1 lead and a chance to win his fourth straight start.

"I think that's something that separates us from other teams," Margot said through a translator. "We're able to make plays that maybe others can't make."

Blue Jays: Springer left the game with a sprained left ankle in the third inning after crashing into the wall while going after Lowe's first triple. Montoyo said there was no swelling and expects Springer to play Saturday. ... C Dan Jansen, who has not played since April 10 because of an oblique strain, might be activated as early as Saturday.