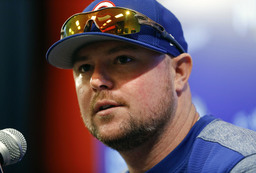 CHICAGO (AP) Jon Lester, a durable left-hander who won three World Series titles during 16 years in the majors, has announced his retirement.

The 6-foot-4 Lester helped Boston win the championship in 2007 and 2013, and led the Chicago Cubs to the title in 2016. The championship for the Cubs was the franchise's first since 1908.

"It's kind of run its course," Lester told ESPN. "It's getting harder for me physically. The little things that come up throughout the year turned into bigger things that hinder your performance.

"I'd like to think I'm a halfway decent self-evaluator. I don't want someone else telling me I can't do this anymore. I want to be able to hand my jersey over and say, `Thank you, it's been fun.' That's probably the biggest deciding factor."

Lester's first big league season was cut short when he was diagnosed with a rare form of lymphoma. He underwent chemotherapy and returned to the majors in July 2007, helping the Red Sox to the AL East title by going 4-0 with a 4.57 ERA in 12 games down the stretch.

Lester then delivered in the postseason, pitching 5 2/3 scoreless innings in Boston's clinching 4-3 victory over Colorado in Game 4 of the World Series.

Lester signed a $155 million, six-year contract with Chicago after the 2014 season. He shared NLCS MVP honors with Javier Baez on the way to the Cubs' historic championship in 2016.

Lester got his 200th career win when he pitched six effective innings for St. Louis in a 5-2 victory at Milwaukee on Sept. 20.