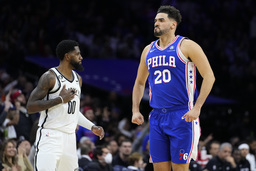 The red-hot Philadelphia 76ers will look for their sixth consecutive victory when they host the Brooklyn Nets on Wednesday night.

Philadelphia capped the sweep with a 129-127 come-from-behind win Saturday at Sacramento while playing without Joel Embiid and James Harden.

"We were down 21 points and all we talked about was winning the game," Sixers coach Doc Rivers said. "We didn't panic. Just every timeout, we're going to win the game. Just hang in there. Came out the beginning of the third and grabbed the lead."

Tyrese Maxey led the way with 32 points while Montrezl Harrell, Tobias Harris and Georges Niang each added 17. Shake Milton scored 15 and De'Anthony Melton had 14 in the balanced effort.

"Mainly, just we got some stops finally, and then once you start getting those stops, you can get out and run you can play freely," Maxey said. "Once you can play freely, you got a lot of different guys that can do a lot of things. Everybody was making shots. Shake and Georges off the bench played well. Even (Paul) Reed came in and gave us big minutes."

Embiid and Harden sat out for rest and recovery due to foot injuries and both are expected to play in this highly anticipated matchup with Brooklyn, which features former Sixers Ben Simmons and Seth Curry.

The Nets will be looking for their third straight win.

In their most recent game, the Nets won a difficult road game, 120-116 over the Golden State Warriors on Sunday.

Kyrie Irving had 38 points, nine assists and seven rebounds for the Nets, who continue to play without an injured Kevin Durant.

Durant has been out since Jan. 8 with a sprained MCL. The team said Tuesday that his recovery is progressing well, but he will be out for at least two more weeks.

Nic Claxton added career-highs of 24 points and 15 rebounds to go along with three blocked shots.

The Nets rallied from 17 down to post the impressive victory.

Royce O'Neale knocked down the go-ahead 3-pointer to complete the comeback. He's now shooting a career-best 40.5 percent from 3-point territory.

"I think just the work coming in every day, working hard on my craft, and being confident in myself during these games," O'Neale said. "I mean, these guys having a lot of trust me, finding me, and me just having the trusting and having the confidence in myself being that guy."

Brooklyn will arrive in Philadelphia with 16 road wins, the second most in the league.

The 76ers defeated the visiting Nets 115-106 on Nov. 22 when Embiid, Harden and Maxey were all out with foot injuries.

The contest also marked Ben Simmons' return to Philadelphia after falling out of favor and being shipped to the Nets. Simmons was heartily booed while recording 11 points, 11 assists and seven rebounds.