With a home-ice edge, Hurricanes face Bruins in Game 7 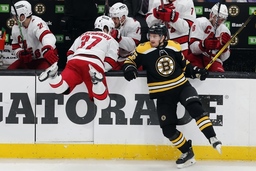 The season will be on the line for both sides when the Carolina Hurricanes host the Boston Bruins in Game 7 of their Eastern Conference first-round series on Saturday in Raleigh, N.C.

The Bruins forced the deciding contest with a 5-2 win in Game 6 on Thursday in Boston.

"This is what you play for," Bruins coach Bruce Cassidy said. "Guys should be excited. Game 7, Stanley Cup playoffs, home or road. I'd rather be at home, but we play where we play. I'd play on Mars if we had to."

For Cassidy's crew to knock out the Hurricanes, they'll have to do something they have yet to accomplish thus far in the postseason -- be victorious in Raleigh.

"We've got to win now one road game," Cassidy said. "That's what's in front of us. We knew that when we started this series. We'd have to win a road game, at least one, if we wanted to advance. So here it is."

Depth proved to be a strength for the Bruins in Game 6, with four of the five goals coming from someone other than their usual go-to scorers, Brad Marchand and captain Patrice Bergeron.

"You always want to help out and produce, but you just want to play the right way," said Charlie Coyle, who had a goal and an assist and sits tied for second on the team in postseason scoring. "That's all it is, no matter who you're playing with.

"We got a lot of contributions from different guys (Thursday). ... We're just glad we got the job done."

Carolina hopes the trend of home-ice advantage, which has factored into each side skating away victorious in their own rinks, continues for Saturday's tilt.

"Everybody is obviously excited about it. It's do or die," goalie Antti Raanta said. "With how the series has been, home teams have been successful. We're hoping that we can keep that going and get the energy from the crowd."

Stronger play on special teams at home has been key for the Hurricanes. After going 0-for-3 on the power play in the series opener, Carolina went 4-for-14 (28.6 percent) in Games 2 and 5. At the other end, the Hurricanes' penalty killers have held the Bruins to one goal on 11 opportunities through three games in Raleigh.

"You need everyone playing detailed hockey and limiting your mistakes as best you can," captain Jordan Staal said. "And obviously just trusting in our game. Those are all the things we faltered at (Thursday). We have to come out in Game 7 with an effort that we obviously need to beat this team."

The Hurricanes are looking for more from their top-end talent, who have struggled to produce as the series has progressed. Andrei Svechnikov scored both goals on Thursday, his first tallies since Game 1.

Sebastian Aho had two assists in Game 5 but hasn't scored since striking twice in Game 2.

"We say it all the time, but we've got to get everyone going," coach Rod Brind'Amour said. "Let's just be blunt. If you play poorly here, then you're going to be in trouble. It was nice to see (Svechnikov) get a couple, but we need everybody to be ready to roll next game."